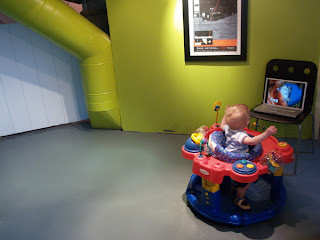 I work out of a home studio. I’ve been amazingly lucky in that my parents moved up to P-town (actually the ‘Couv) last fall right after I launched SFD. I had found a wonderful daycare downtown before my mom generously offered to watch Carson a couple days a week. And you can’t beat Ga’Ma’s rates. Plus she packs homemade treats into his diaper bag.

It’s worked out really well. We meet halfway, StinkZ spends the day across the river with GaGa and I punch the clock in the basement. But now Ga’Ma is jetsetting to DC catching up with old friends, going to conferences, meeting her latest grandson on the East Coast. Having a life (the nerve!)

So lately I’ve been taking client calls on the porch as I wave to Carson through the front window, trying to convince him that Pantone swatches and rulers are fun toys as I toss them over my desk into his Pak-n-Play while returning emails and uploading files, and essentially burning the midnight oil. Unfortunately since he’s been mobile he refuses to be confined by the ExerSaucer (that was my saving grace). If it was 1973 I’d have no problem giving him free reign of the basement, but the lead paint seminar I attended has me paranoid and he’s developed this fascination for pulling electrical cords.

Then I discovered Baby Einstein DVDs. And now I can punch another 20 minutes on the clock. He’s even learned to say “Dog”. Makes me feel like a modern day version of an Enjoli WoMAN. But instead of a suit, I’m in yoga pantZ. And you’d never find me in an evening gown…