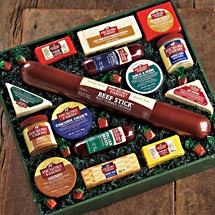 The other night we watched Fired! on the Sundance channel, a documentary about an actress who got fired from a play by Woody Allen and decided to write a book about it, then adapted it into a long-running theatrical performance piece. She went around talking to others who had been fired and they shared their firing stories. There were some hilarious parts and Jason and I started discussing all of our past jobs.

I had a colorful job history from the time I was about 14 through the year I graduated college. I once counted up all my places of employment during those years and I turned out to be some ridiculous number like 23. Ironically, in my professional life I only worked at one company until I branched out on my own with SimplyFine last year.

I’ve been fired twice in my life and both times were in high school. So here’s my I Was Fired Story…

Hickory Farms, December 1990: This was back when Hickory Farms stores were at the mall. Maybe they still have some in the Midwest but I haven’t seen one in years. A few of my friends and I got hired for the busy Christmas season. I was wrapping up cheese blocks with my friend Lisa and the manager asked me to cover the sausage sampler station. I turned to Lisa and said, But can she not see I’m busy cutting the cheese? Which made us both start laughing hysterically because surprisingly for the past month that joke had not gotten old – we just found new ways of using it. Then the manager asked me to leave. I remember it didn’t really sink in that she had just fired me and I said, Oh, that’s alright, my shift isn’t over until 4 – I don’t mind staying until then. And she replied, Amy, I’m not ASKING you if you WANT to leave, I’m TELLING you to GO. You can pick up your final check on Friday. Did I mention this was Christmas Eve?

Kirby Carpet Cleaning, Spring 1991: A few months later I was fired as a telemarketer from Kirby Carpet Cleaning. Our goal was to make two cleaning appointments for the following day and after a slow night I had only made one so another guy offered up one of his to pass off as my own. The next day the supervisor called me in to her office. She had rummaged through the trash and found the original appointment card the guy had written up. I was calling the Ls and he had been calling the Hs and I guess it was quite obvious what we had done considering our “lead book” was the local phone book. To this day I can still remember my spiel word for word.

I wonder what Carson’s first job will be. I hope to raise him with a good work ethic but if he logs 23 jobs before the age of 22 I think it will build character.