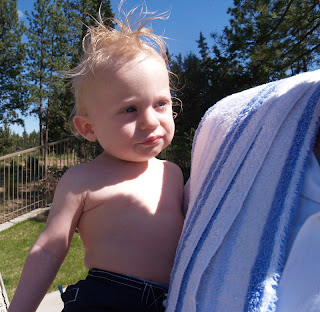 We spent a relaxing Memorial Day weekend in Central Oregon with our friends who have a five month old son. The weather was gorgeous and it felt so nice to escape. The house we stayed at was walking distance to downtown Bend and just steps from the whitewater of the Deschutes. On Sunday we went for a long hike along the river with Carson propped up high in the Kelty pack. Stinkz refused to wear his fashionable floppy hat and after the fifth time plucking it off the trail I decided a better way to shield him from the sun’s harsh rays was to slather his noggin with SPF 50. Sporting his new rock star ‘do we were able to log over eight miles without turning his scalp into a sun dried tomato. Carson also took his first dip in a pool. He didn’t exactly take to the water like a fish, but in his defense it had been a long day and he was pretty cached out. He still looked adorable in his swim trunks. 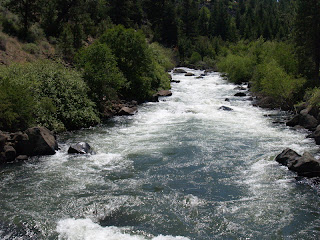