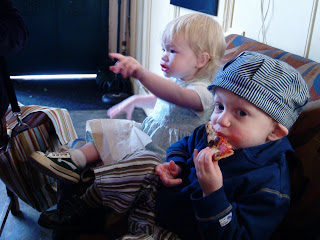 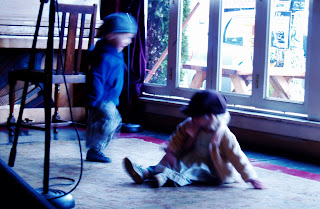 Carson went on a date to Mississippi Pizza with his friend Marti last Friday. They allow kids in the bar until 9 with live music. The music usually ranges from bluegrass to indierock but on the night we were there it was all strings – banjo, violin, bass and guitar playing old time music. We arrived early before the band started their set and Carson and Marti had free reign of the stage for spinning, dancing and romping around. Which was good because by the time the musicians took the stage the place was packed. They camped out in front but it took a lot of restraint for Carson not to rush the stage.