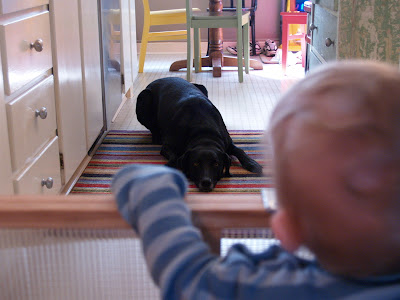 Poor MadiGirl. Ever since the safety gates went up a month ago she always seems to find herself on the other side. She’ll decide she wants to play in the backyard but she’s trapped in the living room by the gate. She’ll hear the mailman or another dog walking in front of the house but the gate stands between her and keeping tabs on the neighborhood. And then there’s the whole upstairs/downstairs issue.

There are other ways for her to get to where she wants to be but it involves walking through The Bathroom which she adamantly avoids because of her fear of water (yes, she’s half lab but she’s got her quirks). It doesn’t help that Carson takes it as his cue to stand at the gate and giggle whenever he hears Madi start to whine. Sometimes she’ll just throw herself onto the floor in defeat, letting out a heavy sigh.

So until they invent a gate with a doggie door, Madi realizes she can clear 24 inches (I’ve seen her jump the garden fence a number of times, it’s just a mental barrier), or she comes to the realization that one of us isn’t lurking behind the shower curtain, prepared to snatch her up and give her a bath if she comes within three feet of the bathroom, we’re forced to take up the role of Gatekeeper throughout the day, constantly opening and closing the latches. And then we do what we’ve done for the past ten months every time Madi looks at us with her sad eyes that seem to say, You used to love me more, this never happened before Stinkz came along.

We give her another treat.