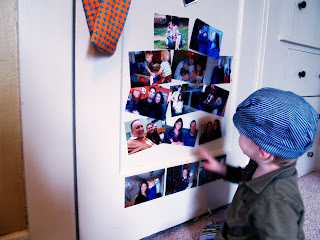 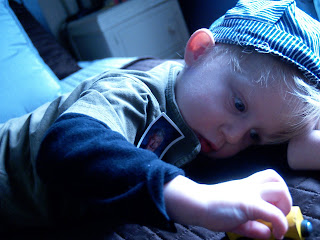 Carson has a photo door in his room where we’ve put up pictures of his aunts, uncles, cousins and grandparents. He’ll point to a photo and say, “Nay-Nay!” or “Jen!” and often everyone gets a big wave when we’re heading out the door.

A few weeks ago he spotted a sheet of wallet photos of my dad when he was up at my parents’ house and took some home. We stuck one on the photo door but the next morning Carson decided Papa looked a little bored. So he took him off the door and put him on his shirt. Since then Papa has taken train rides, been featured in a dinosaur book, joined us for a few meals, and sometimes just likes to hang out in Carson’s coat pocket for the day. At night before he goes to bed he makes sure Papa gets taped back on the door to join the rest of the family. I’ve asked him if we should invite any other members on his daily adventures but so far Papa is the only one who’s portable.