Each September, thousands of migrating Swifts perform swirling aerial shows over the grounds of a local elementary school before pouring into the old brick chimney at sundown (it looks like smoke in reverse!). They roost for the night during the month until the weather turns cold and they head for Mexico and Central America to winter. 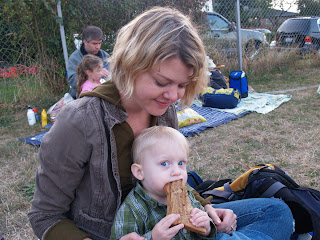 Last night we packed a picnic, a bottle of vino and met up with Carson’s uncle Eric to watch the show. We stopped off at New Seasons for sandwiches and decided that Carson is enough of a big boy now to handle his own.

The birds started swirling shortly after we arrived and eventually grew to a thick swarm. Carson was so in to his Swiss and avocado on wheat that it took him a while to notice the winged creatures overhead, but once he did he started pointing and squealing.

It was an amazing sight and I know we’ll return again next year. And in the Drews family, if you do it twice it’s an official “family tradition.”

Here’s a video I found on YouTube so you can get the full experience: