Recently Hadley has been asking me to style her hair in certain ways {she’s 4!}. After watching the Summer Olympics and taking gymnastics she started asking for high ponytails and buns. Her hair is too short to be pulled up into a single unit so we created a style called Twisties. Basically,  I twist sections of her hair, wrap them into small buns, and secure with a bobby pin. It’s become her signature hairstyle.

She inherited my fine hair that will never fall in thick waves down her back. Part of me is relieved. She loves getting her hair cut and I never mastered the French braid or any other fancy style requiring anything more than pulling back into a loose ponytail. So now that I have a daughter of my own I empathize with what my mom faced with me growing up. A while back I wrote this short story about my childhood hair fiascos: 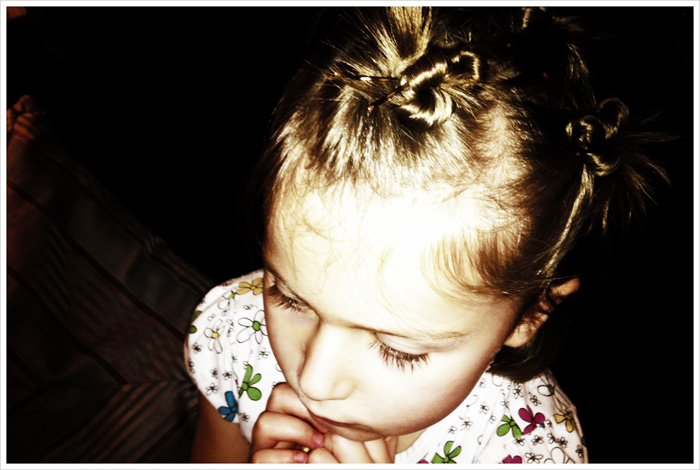 Sarah and The Spectacular Hairdo

We had the outfits planned out well in advance. My sister had just passed down her navy blue corduroy overalls and the time had come when mine were pulling a little tight over the shoulders and fell just at the ankles. I folded them up in a brown paper bag to take to school for my best friend Sarah.

A bag of hand-me-downs held endless possibilities and now we had matching overalls, each with an embroidered butterfly patch at the knee. We grew excited at the thought of how delightful we would look in our matching ensembles and decided the day must be a week from Friday, the annual field trip to the Natural History Museum.

We’d be twins, right down to our matching socks. People wouldn’t be able to tell us apart.

Now for the hair. It must be pulled back. Simple braids were over and done. A ponytail much too plain. When Sarah waltzed through the door the Monday before the Big day there was no question on what the style would be.

Sarah’s mom was a whiz when it came to hair. Pin curls, inverted braids, there was nothing she couldn’t do with Sarah’s long, sun-streaked lochs. And on this morning she had worked her magic into something spectacular. For Sarah had not just one, but three braids, neatly twisted, not a strand astray, emerging from a ponytail centered to perfection at the back of her head, the ends cleverly tucked back underneath the rubber band. It was a work of art. I stared in admiration.

For the rest of the week I tried to the best of my ability to explain the exact format of the style to my mother. I was worried she wouldn’t be able to pull it off. My hair had just gotten to the length, after a traumatic year of strangers innocently mistaking me for my siblings’ younger brother, that it was possible to pull back, tie in a rubber band, and still be left with a workable length. I saw the potential.

On Friday morning I awoke extra early. I couldn’t wait to put my legs through the soft corduroy, pull the yellow turtleneck over my head and slip my feet into my brown Hush Puppies. I stood before the floor length mirror in the hallway, pleased with the reflection I saw, then headed for the bathroom to complete the look.

I opened the top drawer in search of the thick-bristled brush. Setting it on the counter, I hunted in vain for the ponytail holders, finally locating four of them after rearranging the vast array of toiletries under the sink.

“Mom, I’m ready!” I found her in the kitchen, finishing up her morning coffee.

She glanced at the clock above the stove. “Why don’t you just wear it down. I’ll find a ribbon to match.”

She didn’t understand the devastating implications of her words.

“Then Sarah and I won’t be twins! We have to wear our hair the same way. We have it all planned,” I explained for the umpteenth time.

“Alright, but the carpool will be here in 20 minutes.”

I sprinted to the bathroom, taking a seat on the toilet. I handed her the rounded brush as she tried to offer me a confident smile.

“Remember, no lumps,” I said, taking the mirror in hand.

As she began brushing through my dishwater-blonde tresses I closed my eyes, envisioning what the outcome would be. She twisted the rubber band around, catching her index finger on the second loop as I felt the pull loosen against my scalp.

“There won’t be lumps.” I could sense a hint of frustration in her tone.

She began dividing my hair into sections as the braiding process began. After a few minutes she had a brief moment of hesitation and her fingers ceased to move.

“The ends are supposed to go back underneath the rubber band?” she asked, as if it was an impossible feat.

“Yes! And the ends aren’t supposed to show.”

In the reflection of the hand held mirror, I saw her reach for the basket of bobby pin. This wasn’t a good sign.

“Nobody will notice,” she replied, sticking the metal clips at all angles into the back of my head. “There you go. All set!”

I jumped up and my mouth dropped as I caught my full reflection in the bathroom mirror. Lumps! Look at those lumps! I had lumps the size of golf balls on my head. I swung around to inspect the back. My eyes teared up as I saw the uneven braids, wisps falling out, pinned with bobby pins that were anything but discreet.

Just then my sister appeared in the doorway to watch the drama unfold.

“I thought the ends were supposed to be tucked under,” she observed.

“Yes! Yes!” I looked up at her, begging her help in fixing the terrible excuse for a hairstyle atop my head.

She took the brush and tried to no avail to smooth out the lumps. Releasing a few of the bobby pins, she took the end of a braid and with her tiny fingers tried to force it under the rubber band.

“I think you’re making it worse!” I cried as one of the braids began to unravel.

“I’m just trying to help.” We looked at each other in the reflection, tears streaming down my face as my sister’s eyes began to water. She felt my pain.

A car horn sounded out front. The carpool was here! The morning frenzy began as my sister scrambled for her lunch bag and books. But I stood motionless before the bathroom sink, my high hopes of a perfect day shattered before I even walked out the door.

“Hurry up! You’re running late,” my mom called, handing off my Strawberry Shortcake lunch pail as if it was just an ordinary day. “Have a great day at the museum.”

“Oh, Amy, it’s not that bad. Just don’t make a such big deal out of it and nobody will notice,” she said as she scooted me out the door.

I sat in silence in the back seat, praying that something would happen to prevent us from reaching the school. A flat tire. A flood. Anything.

Fifteen minutes later I walked into my classroom with five minutes to spare before the final bell. Sarah immediately came up to greet me, but as her brown eyes fell upon the eyesore atop my head, her dainty hand reached up to her lips and she stopped mid-sentence.

“Oh, Amy.” She was at a complete loss for words.

A lump formed in my throat as I tried to stay strong. Her hair looked smashing. Her mom had even managed to find a yellow ribbon, the exact shade of her turtleneck, to pull the whole masterpiece together.

“I wish you could have stayed over at my house and my mom could have done your hair for you.”

But it was too late now. I took my seat as Miss Bell set the ground rules for the day. I felt Sarah’s eyes on me from across the room, and as I glanced up I caught a look of pity on her heart-shaped face before her lips quickly turned up in a smile.

Excitement filled the air as we boarded the yellow bus and headed for the museum. Throughout the day I tried to forget about my hair and enjoy the excursion. But each time I peered in to take a closer look at a dinosaur fossil, I couldn’t help but catch my reflection in the glass display.

Nobody mistook Sarah and I for twins.