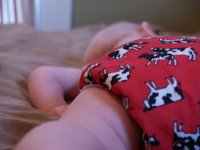 It was inevitable that eventually we would have to stop. We’ve been calling The Gnome “Stinkerpantz”(aka Stinker aka Stinkz) since he was in utero. In the early months after he was born it was only when he was fussy or actually smelled bad. And then as time went on it became the only name we ever called him and now it’s a rare occasion when we refer to him as Carson. This week we noticed that he started responding to the name. He hears Stinkerpantz and will turn our way and flash his toothless grin. Call him Carson and he’ll return with a blank stare. The problem is now it’s so deeply ingrained into our daily dialogue that stopping cold turkey has been challenging. We’re trying to come up with a suitable replacement before he starts talking and telling strangers at the grocery store that his name is Stinkerpantz Drews.