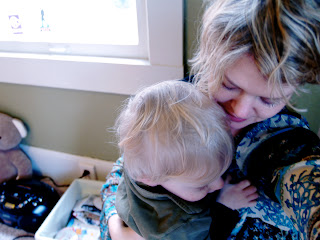 Before I became a mom I knew exactly the kind of mom I was and wasn’t going to be. I wasn’t going to be one of those moms whose house is cluttered with toys. Or a mom who refers to herself in the third person; I found that really annoying. I also planned to continue running and log miles and miles each week up in Forest Park with the Bob Ironman my generous coworkers had bought for me.

I remember telling one of them when I was six months pregnant that I’d probably run the Portland Marathon that fall. Seattle half at the very least. She laughed and replied, “Yeah, you’re going be pushing that high-tech stroller around the mall.” She had two kids herself and apparently thought she knew more than me when it came to being a mom.

I think the realization that my preconceived mom image of myself didn’t turn out to be spot on came last week as I was tripping over Carson’s blocks and puzzle pieces while explaining to him that “Mama needs to hustle or she’ll be late for Baby Boot Camp.”

Baby Boot Camp doesn’t involve any trail running. It’s a class that takes place early in the morning at the mall. My friend Carrie convinced me to start going about a month ago and I am so happy she did. It’s actually a pretty intense 75 minute workout and Carson has a blast. He gets to see the Zamboni and people watch while lounging in The Bob eating his Lara Bar and swigging water from his Sigg. As we run through the mall he points out all the hats and shoes in the window displays at Old Navy. Then while we’re doing abs and stretching he runs around with the other babies. Next month the class will be moving outdoors through the fall. I’m looking forward to heading out to the park and breaking a sweat in the fresh air again, although I’m kind of going to miss the sweet smell of Cinnabons wafting from the food court in the mornings. And you should see the way The Bob handles those tight corners around the T-Mobile Kiosk.