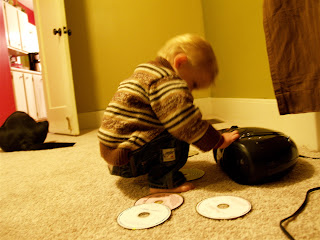 We’ve always played classical music for Carson at night and part of his bedtime routine includes choosing the CD before we tuck him in. For the past few months it’s been Lullaby Classics featuring a variety of classical songs ranging from Mozart to Vivaldi.

A few days ago the CD started skipping off and on. We’d put him to bed, close the door and five minutes later we’d here “DNGDNGDNGDDNGGGGGG!” and walk in to find Carson standing in his crib chanting “Uh Oh, Uh Oh, Uh Oh!” and pointing to the CD player playing the same note over and over. We’d skip the song and he’d go back to bed. But then it started happening on almost every track.

So I decided to introduce some new tunes into his nighttime repertoire and spent some time picking out songs and burning him a fresh CD from our iTunes library. A little of Beethoven’s Moonlight Sonata, some Gershwin, I even included his favorite track from Lullaby Classics at the end. I decorated the CD with musical notes and a treble clef using a fancy turquoise Sharpie and called it “Mr. Sandman’s Classical Bedtime Mix.” I thought he’d dig it.

Last night during Carson’s bedtime routine we presented him with the new CD. Jason popped it in the CD player and I waited for his enthusiastic response. Barely three notes played before Carson raced over, promptly hit the eject button and tossed it aside. He scrambled through his CD collection until he found his Lullaby Classics disc (which I was planning to toss out), popped it in and pressed play. Then he turned and gave us the stink eye.

And ironically it stopped skipping.