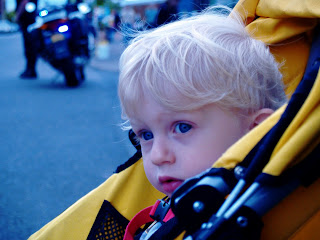 For the past few months Carson has peppered his speech with a word that had us completely stumped. We can decipher most of what comes out of his mouth and when one of us can’t, the other can usually understand enough to translate. But we were at a total loss on this one.

It sounds like this: “Sokins” and he uses it in a variety of contexts: “Sokins!,” he yells enthusiastically as we play ball in the backyard. “Sokins Booberries!” he’ll say across the table at breakfast. “Sokins?” he’ll ask as I take a swig of my water bottle. He’ll stick Hadley’s binky in his mouth and mutter a mumbled,”Sokins.”

Then last week he was looking at photos and as he pointed to himself he kept saying “Sokins!” It finally dawned on us he’d been saying HIS OWN NAME.

In an attempt to get him to pronounce his name correctly we decided to break it down by syllable. We know he has no problem saying CAR or SON. He looked right at us, repeated his name clearly and started giggling hysterically.

Then he asked if Sokins could go outside. And apparently Sokins prefers to refer to himself in the third person.