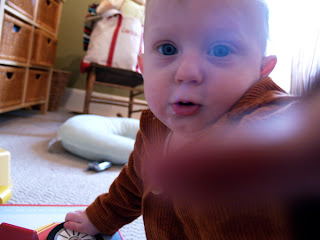 Last week I took Carson to his first storytime at the local library. A half hour filled with singing, games, books and babies along with their moms (and quite a few dads and grandparents). Everything was going smoothly until the teacher presented the grand finale…an enormous basket of toys.

As the basket landed in the center of the circle, Bubs’ eyes bulged and from that point on it was complete and utter chaos. He made a beeline for the basket, taking out anything and anyone that stood in his path (including an adorable six month old he had been flirting with moments earlier). She toppled to the ground helplessly, and just as I was helping her back up, I heard Bubs shrieking at the top of his lungs. I looked up to see him pulling toys from the 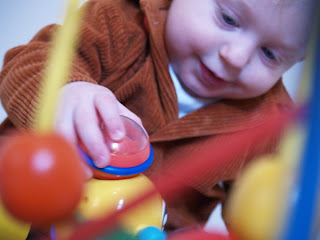 basket and flailing them around the room. Then he stopped momentarily, distracted by a noise coming from over his shoulder, and turned to spot another baby shaking a plastic rattle. He then proceeded to lunge over and swipe the toy from his grasp, showing the kid how to really make some noise. I maneuvered my way through the obstacle course of crawling infants and discarded toys to reach him and attempted to give the toy back, attract his attention to something else, but he had a death grip around the handle and was not about to release…but rather protest LOUDLY. “It’s alright, looks like Carson wants the toy more than little Noah here,” the boy’s dad offered up politely, patting his docile child on the head as I watched Carson giggle with glee, then toss the toy aside and return to the basket for more.

This was Carson’s first post-crawling outing with other babies. We’ll be making more public appearances in the coming months to get him used to this whole sharing idea, although I think it will be awhile before he’ll understand. 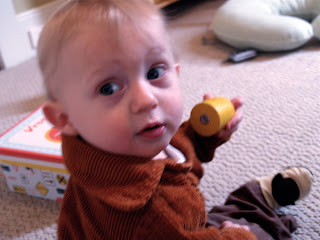