A few years ago with the best of intentions we bought an old diesel Mercedes that we’ve run on biofuel. In the end it turned out to be a rather spendy endeavor. Biofuel prices soared. Old cars need lots of fixing. The Grey Car (as Carson calls it, Jason has a few other choice names for it) was always coming down with new ailments. Finally last week Jason pulled up to his destination, turned off the ignition and took out the key. But the Grey Car kept on ticking. Now to kill the engine popping the hood is required. Last straw.

The Grey Car will be making no more trips to the hospital. We’re putting her out of her misery. Up on Craigslist she goes to the highest bidder. And I don’t think they’ll need to bid too high. 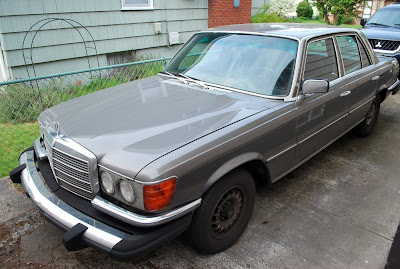 We’re now a one car family, at least through the summer. I’m excited. It’s very liberating. We live within walking distance to many places, including Carson’s school, parks, the grocery store and my favorite coffeehouse. And only a half block from a bus stop. I’ve been getting to know the walking feature on Google Maps quite well. I know it may be challenging at times, but some errands will just take a bit of planning.

Fortunately Carson was given a new set of wheels for his birthday. The Radio Flyer is already proving to be a better mode of transport than The Grey Car. Much more reliable. Doesn’t leak oil. Doesn’t require AAA on speed dial. Plus is has cupholders: 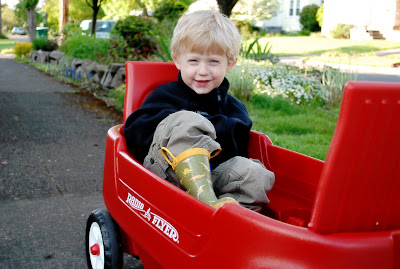