This afternoon I looked out the kitchen window to find Madi attempting to clear the garden fence. I figured she was trying to catch one of the backyard squirrels that have eluded her the past six years until I heard clucking and saw the feathers fly.

I was baffled since I wasn’t aware that any of our immediate neighbors had chickens (and didn’t know they could actually fly high enough to clear seven-foot fences). After knocking on doors (and peeking over a few fences) I located a chicken coop on the next block over and left a note.

Carson came home from school and promptly named him Buster. The hours ticked by. I started contemplating the possibility of Buster not being claimed and Jason realizing his dream of becoming an urban farmer.

Just after dark there was a knock at our front door. Turns out Buster is an ornery hen by the name of Camilla who decided to fly the coop. Tonight she’s back home safe and sound. 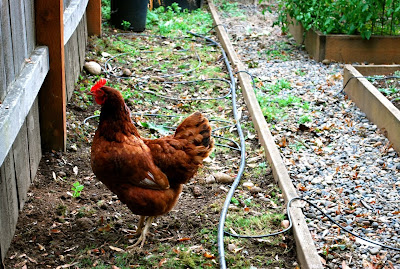