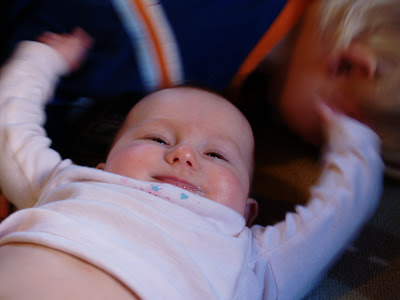 Miss Hadley rolled from her back to her front last week. Unfortunately on the landing her arms became trapped beneath her belly. She was not happy about it and hasn’t pulled out the trick since, but I can tell she’s working on a new technique. Just a matter of time. 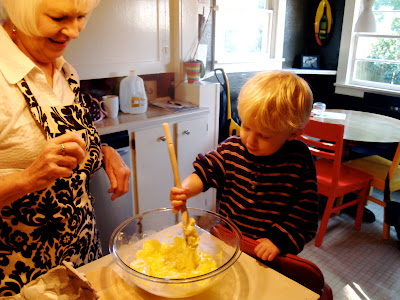 Photo of the Week: Carson baked his first batch of cookies this week with the help of Gaga. The measuring and mixing was fun but the eating was his favorite part. Especially since Gaga always allows him just one more. Miss Hadley made her surprise debut early Wednesday morning, a few weeks
earlier than her official July 29th due date. She weighed in at 6 lbs. 3 oz. and
measured 19.5 inches in length. So far she’s starting out life much like her
big brother – mellow, alert and sleeping a lot. Aside from her
darker features there’s no mistaking they’re related – she’s got the
signature pouty lip and massive feet.

Labor and delivery went amazingly well. My water broke on Tuesday morning and I started having minor contractions. We arrived at the hospital around 6pm and after wavering for weeks I decided to try for a VBAC (Carson was breech and delivered via C-section). It was an intense few hours – I went from 0 to 10cm in just about four hours after the pitocin kicked in. As she was coming out the cord was wrapped tightly around her neck and needed to be cut prior to delivery. All things considered we got very lucky.

When Carson met his baby sister (“Baby Sisthter Hai”) he took note that she has two
eyes, a nose, knees and no shoes. Then he noticed the buttons on my hospital bed and pressing them became far more exciting.

Looking forward to bonding over the weekend and for all of you to meet her! 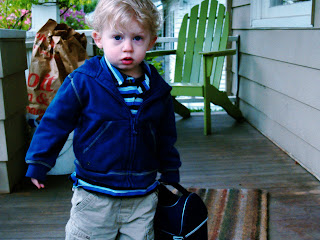 Carson started his first day at his new school last week. He’ll be going a few days a week while I’m working. I think he’s adjusting pretty well, but it’s really hard for me to leave him in the mornings after dropping him off. Especially when he has a monkey hold around my neck saying “Mama, Hug? Please, Hug?” before reluctantly walking to the window to watch me drive away. The day passes quickly with so much to do but by late afternoon I can’t wait to pick him up and hear all about his daily adventures.